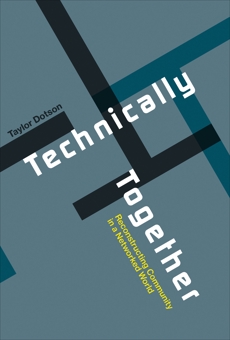 Synopsis: Why we should not accept “networked individualism” as the inevitable future of community.

If social interaction by social media has become “the modern front porch” (as one sociologist argues), offering richer and more various contexts for community and personal connection, why do we often feel lonelier after checking Facebook? For one thing, as Taylor Dotson writes in Technically Together, “Try getting a Facebook status update to help move a couch or stay for dinner.” Dotson argues that the experts who assure us that “networked individualism” will only bring us closer together seem to be urging citizens to adapt their social expectations to the current limits of technology and discouraging them from considering how technologies could be refashioned to enable other ways of relating and belonging.

Dotson characterizes different instantiations of community as “thick” or “thin,” depending on the facets and manifestations of togetherness that they encompass. Individuating social networks are a form of community, he explains, but relatively thin in regard to several dimensions of communality.

Dotson points out that current technological practices are not foreordained but supported by policies, economic arrangements, and entrenched patterns of thought. He examines a range of systems, organizations, and infrastructures—from suburban sprawl and smartphones to energy grids and “cry-it-out” sleep training for infants—and considers whether they contribute to the atomization of social life or to togetherness and community vibrancy. Dotson argues that technology could support multifaceted communities if citizens stopped accepting the technological status quo and instead demanded more from their ever-present devices.