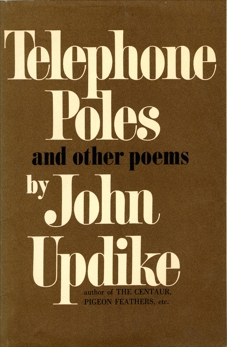 Telephone Poles and Other Poems

Synopsis: WHEN, five years and five books of fiction ago, THE CARPENTERED HEN, John Updike’s first collection of verse, was published, Phyllis McGinley wrote: “I have been happily reading Mr. Updike in The New Yorker for some time and am happy, now, to own him collected.  When he first appeared in that magazine, I was so elated to see a new name in light verse that I felt like crying with the Ancient Mariner ‘A Sail, A Sail!’  His is what poetry of this sort exactly out to be—playful but elegant, sharp-eyed, witty.”  In the Saturday Review, David McCord wrote: “Furthermore, he is a graceful border-crosser (light verse to poem) as Auden has been; as Betjeman and McGinley frequently are.”
This second collection is equally divided between poems that, in their verbal jugglery and humorous bias, seem to qualify as “light” and poems that, one way or other, cross the problematic border into the general realm of poetry.  The distinction cannot be clear-cut.  The poet is consistently concerned with Man’s cosmic embarrassment, and the same vision illuminates the creatures of “The High Hearts” and “Seagulls.”  Science and religion, so frequently and variously invoked, frame a single paradox, the paradox of the mundane; and each poem, whether inspired by an antic headline or a suburban landscape, rejoices in the elusive surface of created things.