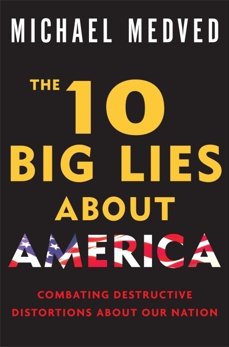 
In this bold and brilliantly argued book, acclaimed author and talk-radio host Michael Medved zeroes in on ten of the biggest fallacies that millions of Americans believe about our country—in spite of incontrovertible facts to the contrary. In The 10 Big Lies About America, Medved pinpoints the most pernicious pieces of America-bashing disinformation that pollute current debates about the economy, race, religion in politics, the Iraq war, and other contentious issues.

The myths that Medved deftly debunks include:

Myth: The United States is uniquely guilty for the crime of slavery and based its wealth on stolen African labor.

Fact: The colonies that became the United States accounted for, at most, 3 percent of the abominable international slave trade; the persistence of slavery in America slowed economic progress; and the U.S. deserves unique credit for ending slavery.

Myth: The alarming rise of big business hurts the United States and oppresses its people.

Fact: Corporations played an indispensable role in building America, and corporate growth has brought progress that benefits all with cheaper goods and better jobs.

Myth: The Founders intended a secular, not Christian, nation.

Fact: Even after ratifying the Constitution, fully half the state governments endorsed specific Chris­tian denominations. And just a day after approving the First Amendment, forbidding the establishment of religion, Congress called for a national “day of public thanksgiving and prayer” to acknowledge “the many signal favors of Almighty God.”

Myth: A war on the middle class means less comfort and opportunity for the average American.

Fact: Familiar campaign rhetoric about the victimized middle class ignores the overwhelming statistical evidence that the standard of living keeps rising for every segment of the population, as well as the real-life experience of tens of millions of middle-class Americans.

Each of the ten lies—widely believed among elites and taught as truth in universities and public schools—is a grotesque, propagandistic distortion of the historical record. For everyone who is tired of hearing America denigrated by people who don’t know what they’re talking about, The 10 Big Lies About America supplies the ammunition necessary to fire back the next time somebody tries to recycle these baseless beliefs. Medved’s witty, well-documented rebuttal is a refreshing reminder that as Americans we should feel blessed, not burdened, by our heritage.