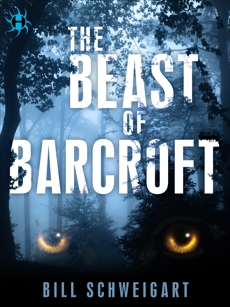 Synopsis: Fans of Stephen King and Bentley Little will devour The Beast of Barcroft, Bill Schweigart’s brilliant new vision of dark suburban horror. Ben thought he had the neighbor from hell. He didn’t know how right he was. . . .

Ben McKelvie believes he’s moving up in the world when he and his fiancée buy a house in the cushy Washington, D.C., suburb of Barcroft. Instead, he’s moving down—way down—thanks to Madeleine Roux, the crazy neighbor whose vermin-infested property is a permanent eyesore and looming hazard to public health.

First, Ben’s fiancée leaves him; then, his dog dies, apparently killed by a predator drawn into Barcroft by Madeleine’s noxious menagerie. But the worst is yet to come for Ben, for he’s not dealing with any ordinary wild animal. This killer is something much, much worse. Something that couldn’t possibly exist—in this world.

Now, as a devilish creature stalks the locals, Ben resolves to take action. With some grudging assistance from a curator at the Smithsonian’s National Zoo and the crackpot theories of a self-styled cryptozoologist, he discovers the sinister truth behind the attacks, but knowing the Beast of Barcroft and stopping it are two different animals.

Praise for The Beast of Barcroft

“A vicious otherworldly creature terrorizes a neighborhood in Schweigart’s swift and breezy suburban creature feature. . . . Readers who appreciate a B-movie sensibility, affable characters, and a sense of fun along with their scares will find much to enjoy.”—Publishers Weekly

“The Beast of Barcroft is a page-turner, seizing the reader and demanding he keep his nose buried in the book until that last page is reached.”—New York Journal of Books

“The Beast of Barcroft is quite chilling at times, but oh what great entertainment it provides. . . . If you like horror novels, don’t hesitate to give [it] a try as it’s a terrifyingly good story.”—Fresh Fiction

“A hybrid of The X Files, Silver Bullet and Supernatural. If you enjoy your horror with a distinctly animalistic edge then I would recommend that you give The Beast of Barcroft a go.”—The Eloquent Page

“The action is fun, the pace is quick, and the imagery is great. I’d highly recommend this to anyone who loves a good afternoon horror story.”—Scifi and Scary Book Reviews