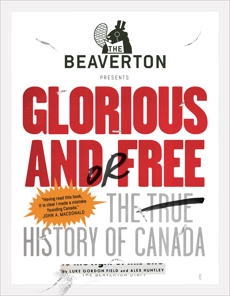 The Beaverton Presents Glorious and/or Free: The True History of Canada

Synopsis: A hilarious tour through Canada's history, from the nation's most trusted news source: The Beaverton.

There is a new media empire in Canada--and unlike others, it is honest about being "fake news." Its satirical headlines have been misinforming Canadians across the country and the world, using parody to shine a light on the nation. What started as an immensely popular online newspaper led to a hit TV show delivering biting commentary on Canadian culture, politics, and the biggest news stories. Now, in its first book, The Beaverton looks back over Canada's past to show how we became the ridiculous nation we are today.

Through the lens of the venerable Beaverton, one of Canada's oldest and proudest newspaper, the editors share the headlines and articles that defined the times. From the challenging days of colonization ("Angry New France mother calls son by using all of his 329 middle and family names") to the earliest days of nationhood ("Paternity test confirms John A. actual father of Confederation"), from war heritage ("Vimy Ridge: Canada becomes a nation after killing Germans for Britain on French soil") right up to the twenty-first century ("Harper government offers apology to victims of first long-form census")--this is Canada like you've never seen it.

Part mock-history, part fake scrapbook, and fully illustrated with original art and historical images,* The Beaverton Presents Glorious and/or Free is a hilarious and ruthless stab at our national myths and legends. And, like all great satire, it's funny because it's true.