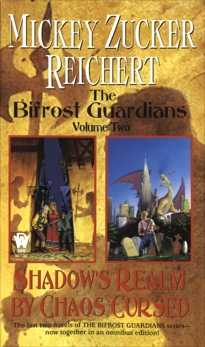 Synopsis: Now in one volume, the final two novels in the startlingly original Bifrost Guardians series: an epic saga of a Vietnam soldier sent through time and space.

Shadow’s Realm: When Shadow received a message that Shylar needed his aid, the master thief and his three companions, Allerum—once a twentieth-century American soldier but now an elf swordsman—and the Dragonmages, Silme and Astryd, immediately set out for Shadow’s hometown of Cullinsberg. For Shylar, town madam and high in the thieves’ underground, was all the family Shadow had. But Cullinsberg was an armed trap waiting to close on them. For they had slain the Chaos Dragon and unleashed a force of pure Chaos, a force which then bonded with the single greatest surviving Dragonmage. Driven by Chaos-induced madness, this master of powers far beyond theirs would use anyone and any means to take his deadly revenge on these four warriors of Law....

By Chaos Cursed: For Al Larson, it began with his death in a firefight in Vietnam. He woke from death to find himself alive—in a body and a world not his own! Transformed into an elf warrior, he became an unsuspecting pawn of the Norse gods, claimed by both Chaos and Law. Faced with challenges that would take him to Hel and back, Al teamed up with two sorceresses and a master thief in the endless battle against Chaos. But when Al and Shadow the thief slew the Chaos Dragon, they unleashed a magical force beyond anyone’s power to contain. Working a desperate magic, Al and his companions fled back to a twentieth-century America which was not quite Al’s own. But Chaos wouldn’t let Al, Shadow, and the Dragonrank mages Silme and Astryd escape so easily. A mortal man once again, Al found himself caught in a last-ditch fight to save everyone he held dear, as Chaos pursued him into the heart of New York City....