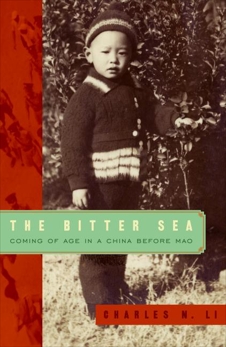 The Bitter Sea: Coming of Age in a China Before Mao

In this exceptional memoir, Charles N. Li brings into focus the growth pains of a nation undergoing torturous rebirth and offers an intimate understanding of the intricate, subtle, and yet all-powerful traditions that bind the Chinese family.

Born near the beginning of World War II, Li Na was the youngest son of a wealthy Chinese government official. By the time he was twenty-one, he had witnessed enough hardship, hope, and tremendous change to last a lifetime. Li saw his family's fortunes dashed when Chiang Kai-shek's Nationalists came to power in 1945, transforming his father from a powerful official to a prisoner jailed for treason. He survived a year in a dangerous Nanjing slum and watched from his aunt's Shanghai apartment as the Communist army marched in and seized the city in 1948. He experienced both the heady materialism of the decadent foreign "white ghosts" in British Hong Kong and the crippling starvation within the harsh confines of a Communist reform school. He went from being Li Na—the dutiful Chinese son yearning for a harsh, manipulative father's love—to Charles, an independent Chinese American seeking no one's approval but his own.

Lyrical and luminous, intense and extraordinary, The Bitter Sea is an unforgettable tale of one young man and his country.