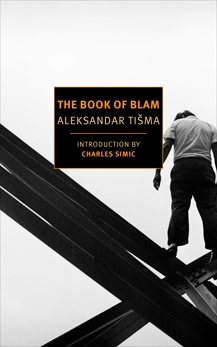 The Book of Blam

Synopsis: The Book of Blam, Aleksandar Tišma’s “extended kaddish . . . [his] masterpiece” (Kirkus Reviews), is a modern-day retelling of the book of Job. The war is over. Miroslav Blam walks along the former Jew Street, and he remembers. He remembers Aaron Grün, the hunchbacked watchmaker; and Eduard Fiker, a lamp merchant; and Jakob Mentele, a stove fitter; and Arthur Spitzer, a grocer, who played amateur soccer and had non-Jewish friends; and Sándor Vértes, a lawyer who was a Communist. All dead. As are his younger sister and his best friend, a Serb, both of whom joined the resistance movement; and his mother and father in the infamous Novi Sad raid in January 1942—when the Hungarian Arrow Cross executed 1,400 Jews and Serbs on the banks of the Danube and tossed them into the river.

Blam lives. The war he survived will never be over for him.