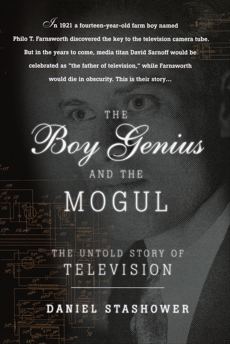 The Boy Genius and the Mogul: The Untold Story of Television

Synopsis: The world remembers Edison, Ford, and the Wright Brothers. But what about Philo T. Farnsworth, the inventor of television, an innovation that did as much as any other to shape the twentieth century? That question lies at the heart of The Boy Genius and the Mogul, Daniel Stashower's captivating chronicle of television's true inventor, the battle he faced to capitalize on his breakthrough, and the powerful forces that resulted in the collapse of his dreams.

The son of a Mormon farmer, Farnsworth was born in 1906 in a single-room log cabin on an isolated homestead in Utah. The Farnsworth family farm had no radio, no telephone, and no electricity. Yet, motivated by the stories of scientists and inventors he read about in the science magazines of the day, young Philo set his sights on becoming an inventor. By his early teens, Farnsworth had become an inveterate tinkerer, able to repair broken farm equipment when no one else could. It was inevitable that when he read an article about a new idea -- for the transmission of pictures by radio waves--that he would want to attempt it himself. One day while he was walking through a hay field, Farnsworth took note of the straight, parallel lines of the furrows and envisioned a system of scanning a visual image line by line and transmitting it to a remote screen. He soon sketched a diagram for an early television camera tube. It was 1921 and Farnsworth was only fourteen years old.

Farnsworth went on to college to pursue his studies of electrical engineering but was forced to quit after two years due to the death of his father. Even so, he soon managed to persuade a group of California investors to set him up in his own research lab where, in 1927, he produced the first all-electronic television image and later patented his invention. While Farnsworth's invention was a landmark, it was also the beginning of a struggle against an immense corporate power that would consume much of his life. That corporate power was embodied by a legendary media mogul, RCA President and NBC founder David Sarnoff, who claimed that his chief scientist had invented a mechanism for television prior to Farnsworth's. Thus the boy genius and the mogul were locked in a confrontation over who would control the future of television technology and the vast fortune it represented. Farnsworth was enormously outmatched by the media baron and his army of lawyers and public relations people, and, by the 1940s, Farnsworth would be virtually forgotten as television's actual inventor, while Sarnoff and his chief scientist would receive the credit.

Restoring Farnsworth to his rightful place in history, The Boy Genius and the Mogul presents a vivid portrait of a self-taught scientist whose brilliance allowed him to "capture light in a bottle." A rich and dramatic story of one man’s perseverance and the remarkable events leading up to the launch of television as we know it, The Boy Genius and the Mogul shines new light on a major turning point in American history.