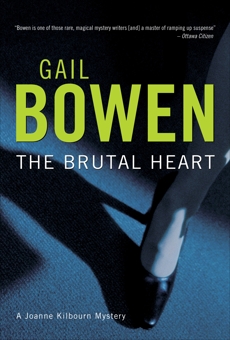 Synopsis: The bestselling Gail Bowen returns with a gripping story of marriage, politics, sex, and murder.

With a general election just weeks away, Joanne Kilbourn is following the campaign of Ginny Monaghan, a woman who has her eyes set on the leadership of the federal Conservative Party and whose success depends, not so much on the election-day poll, but on the outcome of a custody battle she’s fighting with her ex. Joanne thinks this is perfect material for a TV program she’s putting together on women and party politics. Happy to be back in the political fray that used to be her life during her first marriage, Joanne is soon also glad of the distraction it provides. A local call girl has been murdered — a woman whose regular clientele included several of Regina’s most prominent lawyers, including — until he met Joanne — her own husband, Zach Shreve.

Her new marriage creaking under the strain of this revelation, Joanne throws herself into her project — and into finding out why the dead woman had started to threaten her clients with blackmail, an investigation that leads to the truth — and to death.

In The Brutal Heart, Bowen expertly mixes the ingredients of marriage, family, politics, and murder into a constantly surprising and compulsively readable story.