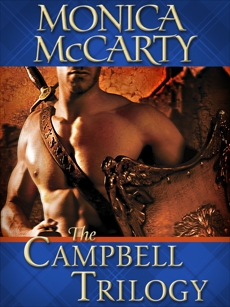 Synopsis: Monica McCarty’s novels of Scottish historical romance are the gold standard in a genre known for sensual intrigue. In this riveting trilogy, the men and women of the Campbell clan lose themselves in the velvet darkness of passionate nights, play deadly games of murder and treason, and fight to forge a love as strong as the sword that rules the Highlands. This up-all-night eBook bundle includes:

The ruthless enforcer of Scotland’s most powerful clan, Jamie Campbell will use any means necessary to vanquish unrest among the feuding Highlanders, but when he poses as a suitor to a rival clan’s daughter, the line between duty and pleasure is suddenly blurred. Caitrina Lamont has no intention of forsaking her father and brothers for a husband—especially a hated Campbell. But Jamie’s raw, sensual strength and searing kiss melt her resistance. When her idyllic world is shattered, Caitrina finds that her only hope lies in the arms of the enemy.

Handsome and dangerous, Patrick MacGregor is a wanted man who will stop at nothing to save his outlawed clan, even if it means marrying Elizabeth Campbell, the daughter of his worst enemy. Yet the flaxen-haired beauty makes him want much more than revenge. Inside the shy and dutiful Lizzie, a passionate woman longs to emerge. So when the piercing emerald eyes of a stranger spark a desperate hunger, she surrenders to Patrick’s glorious seduction—unaware that his daring deception has just found its one and only chance for redemption.

Framed for a crime he did not commit, Duncan Campbell has returned to the Highlands to clear his name. After ten years in exile, Duncan is drawn to the headstrong girl who once betrayed him—and who now shows him the bad end of a pistol. No longer a starry-eyed girl but a woman with dangerous secrets, Jeannie Gordon cannot forgive Duncan’s shattering mistrust of her nor can she sign his death warrant by turning him in. Soon passion flares hotter and bolder than before, sealing a fate the onetime lovers can no longer deny.