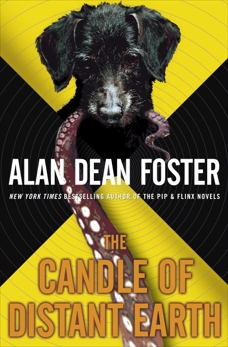 The Candle of Distant Earth

Synopsis: From science fiction legend and New York Times bestselling author Alan Dean Foster comes the climactic final novel in The Taken trilogy, his electrifying space epic about a man and his dog for whom the expression “out of this world” takes on a whole new meaning.

Location is everything. In Chicago, Marcus Walker was a hotshot commodities broker. In the cargo hold of the alien Vilenjji spaceship, he and a laconic dog named George, who has been speech-enhanced to increase his value, are just two more primitive creatures being shipped to the civilized part of the universe, where the market for cuddly extraterrestrial “pets” is busting wide open.

Though Walker and George manage to escape, man and dog are far from overjoyed, being even farther from Earth—billions of miles, in fact—and without a clue as to whether the direction home is up, down, or sideways. Possessing universe-level social skills, Walker becomes the leader of his own armada. Yet even a fleet commander is hard pressed to find a piece of space that no one’s ever heard of, much less cares to find.

To make matters worse, it seems the Vilenjji are proving to be notoriously sore losers. Even if Walker does pull off the impossible and pinpoint his needle of a solar system in the universe haystack, there’s a good chance that the unrelenting Vilenjji will get to him before he ever gets to Wrigley Field.

Yep, it’s a wide-open universe out there, bursting with possibilities—and Walker’s going to get hit with all of them.