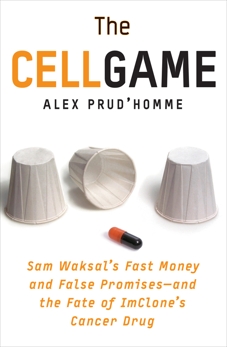 "It began with a promising cancer drug, the brainchild of a gifted researcher, and grew into an insider trading scandal that ensnared one of America's most successful women. The story of ImClone Systems and its "miracle" cancer drug, Erbitux, is the quintessential business saga of the late 1990s. It's the story of big money and cutting-edgescience, celebrity, greed, and slipshod business practices; the story of biotech hype and hope and every kind of excess.

At the center of it all stands a single, enigmatic figure named Sam Waksal. A brilliant, mercurial, and desperate-to-be-liked entrepreneur, Waksal was addicted to the trappings of wealth and fame that accrued to a darling of the stock market and the overheated atmosphere of biotech IPOs. At the height of his stardom, Waksal hobnobbed with Martha Stewart in New York and Carl Icahn in the Hamptons, hosted parties at his fabulous art-filled loft, and was a fixture in the gossip columns. He promised that Erbitux would "change oncology," and would soon be making $1 billion a year.

But as Waksal partied late into the night, desperate cancer patients languished, waiting for his drug to come to market. When the FDA withheld approval of Erbitux, the charming scientist who had always stayed just one step ahead of bankruptcy panicked and desperately tried to cash in his stock before the bad news hit Wall Street.

Waksal is now in jail, the first of the Enron-era white-collar criminals to be sentenced. Yet his cancer drug has proved more durable than his evanescent profits. Erbitux remains promising, the leading example of a new way to fight cancer, and patients and investors hope it will be available soon.