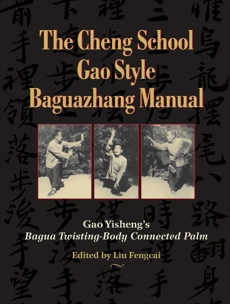 Synopsis: In its first English-language edition, this detailed training manual is a complete guide to Gao baguazhang, as preserved through the lineage of Liu Fengcai. The youngest of the major bagua lineages, Gao bagua shows the influence of taiji quan, xingyi quan, and shuai jiao. It incorporates traditional bagua weapons, pre-heaven palms, and animal forms in addition to sixty-four individual post-heaven palms and their accompanying two-person forms. A unique synthesis of health-building techniques, Daoist theory, and practical fighting applications, Gao-style bagua is an example of the finest internal-arts traditions.

The original manuscript for The Cheng School Gao Style Baguazhang Manual was completed by the art's founder, Gao Yisheng, in 1936. It was not published at the time, but handed down to his student Liu Fengcai, who edited and published the first Chinese edition in 1991 with the help of his own student Liu Shuhang. In 2005, Liu Shuhang published a revised and expanded version, and this was again expanded and reissued in a third edition in 2010. Now, the manual has been translated and fully updated for its first English-language edition. Including over 400 photos showing step-by-step techniques and forms, the manual documents the fundamentals of the art as well as detailed descriptions of techniques and empty-hand forms, laying the groundwork for advanced training. This edition includes rare photos of important masters in the Gao lineage, lineage charts, biographies, and other updates, making it the essential companion for anyone studying Gao style and a useful guide for any practitioner of baguazhang or other Chinese martial arts.