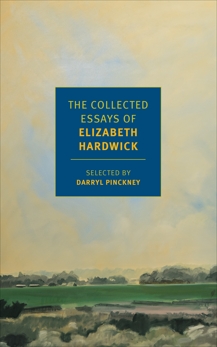 The Collected Essays of Elizabeth Hardwick

Synopsis: The first-ever collection of essays from across Elizabeth Hardwick's illustrious writing career, including works not seen in print for decades.

Elizabeth Hardwick wrote during the golden age of the American literary essay. For Hardwick, the essay was an imaginative endeavor, a serious form, criticism worthy of the literature in question. In the essays collected here she covers civil rights demonstrations in the 1960s, describes places where she lived and locations she visited, and writes about the foundations of American literature—Melville, James, Wharton—and the changes in American fiction, though her reading is wide and international. She contemplates writers’ lives—women writers, rebels, Americans abroad—and the literary afterlife of biographies, letters, and diaries. Selected and with an introduction by Darryl Pinckney, the Collected Essays gathers more than fifty essays for a fifty-year retrospective of Hardwick’s work from 1953 to 2003. “For Hardwick,” writes Pinckney, “the poetry and novels of America hold the nation’s history.” Here is an exhilarating chronicle of that history.