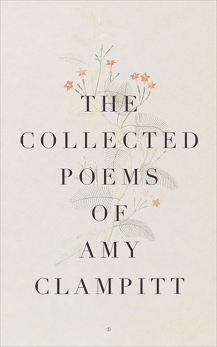 Synopsis: When Amy Clampitt's first book of poems, The Kingfisher, was published in January 1983, the response was jubilant. The poet was sixty-three years old, and there had been no debut like hers in recent memory. "A dance of language," said May Swenson. "A genius for places," wrote J. D. McClatchy, and the New York Times Book Review said, "With the publication of her brilliant first book, Clampitt immediately merits consideration as one of the most distinguished contemporary poets."

She went on to publish four more collections in the next eleven years, the last one, A Silence Opens, appearing in the year she died.
Now, for the first time, the five collections are brought together in a single volume, allowing us to experience anew the distinctiveness of Amy Clampitt's voice: the brilliant language--an appealing mix of formal and everyday expression--that poured out with such passion and was shaped in rhythms and patterns entirely her own.

Amy Clampitt's themes are the very American ones of place and displacement. She, like her pioneer ancestors, moved frequently, but she wrote with lasting and deep feeling about all sorts of landscapes--the prairies of her Iowa childhood, the fog-wrapped coast of Maine, and places she visited in Europe, from the western isles of Scotland to Italy's lush countryside. She lived most of her adult life in New York City, and many of her best-known poems, such as "Times Square Water Music" and "Manhattan Elegy," are set there.

She did not hesitate to take on the larger upheavals of the twentieth century--war, Holocaust, exile--and poems like "The Burning Child" and "Sed de Correr" remind us of the dark nightmare lurking in the interstices of our daily existence.

It is impossible to speak of Amy Clampitt's poetry without mentioning her immense, lifelong love of birds and wildflowers, a love that produced some of her most profound images--like the kingfisher's "burnished plunge, the color / of felicity afire," which came "glancing like an arrow / through landscapes of untended memory" to remind her of the uninhabitable sorrow of an affair gone wrong; or the sun underfoot among the sundews, "so dazzling / . . . that, looking, / you start to fall upward."

The Collected Poems offers us a chance to consider freshly the breadth of Amy Clampitt's vision and poetic achievement. It is a volume that her many admirers will treasure and that will provide a magnificent introduction for a new generation of readers.

With a foreword by Mary Jo Salter