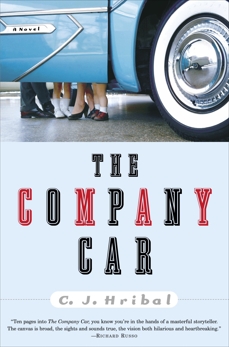 The Company Car: A Novel

Synopsis: An award-winning author has created his most expansive work to date–a captivating family epic, a novel that moves effortlessly from past to present on its journey to the truth of how we grow out of, away from, and into our parents.

“Are we there yet?” It’s the time-honored question of kids on a long family car trip–and Emil Czabek’s children are no exception. Yet Em asks himself the same thing as the family travels to celebrate his parents’ fiftieth wedding anniversary, and he wonders if he has escaped their wonderfully bad example.

The midwestern drive is Em’s occasion to recall the Czabek clan’s amazing odyssey, one that sprawls through the second half of the twentieth century. It begins with his parents’ wedding on the TV show It’s Your Marriage, and careens from a suburban house built sideways by a drunken contractor to a farm meant to shelter the Czabeks from a country coming apart. It is the story of Em’s father, Wally–diligent, distant, hard-drinking–and his attempts to please, protect, or simply placate his nervous, restless, and sensual wife, Susan, all in plain sight of the children they can’t seem to stop having.


As the tumultuous decades merge in his mind like the cars on the highway, Em must decide whether he should take away his parents’ autonomy and place them in the Heartland Home for the Elders. Beside him, his wife, Dorie, a woman who has run both a triathlon and for public office, makes him question what he’s inherited and whether he himself has become the responsible spouse of a drifting partner–especially since she’s packing a diaphragm and he’s had a vasectomy.

Wildly comic and wrenchingly poignant, The Company Car is a special achievement, a book that drives through territory John Irving and Jonathan Franzen have made popular to arrive at a stunning destination all its own.