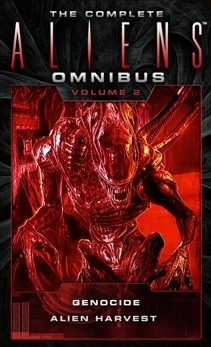 The alien queen is dead, the hive mind left to flounder… and on a world bereft of its leader two strains of Alien divide their forces for world-shattering, acid-drenched war. On Earth, in the wake of alien infestation, athletes are flocking to humanity’s Goodwill Games. But some come with a deadly new tool: a drug called Fire, distilled from the very essence of the Aliens’ body chemistry.

The military wants it. Pharmaceutical kingpin Daniel Grant wants it. But the only place the essential ingredient can be found is on that terrible world, convulsed by Alien holocaust.

Royal jelly, the most illicit of Alien by-products, is keeping Dr Stan Myakovsky alive. A once-famous scientist fallen on hard times, Stan is fighting off the repo-men and trying hard to patent the cybernetic ant that will reinstate his reputation. Julie Lish is beautiful, mysterious, and totally amoral. She has a plan so outrageous that there might be one chance in a million to pull it off.

Together they make an attempt to grab the ultimate treasure—royal jelly from an Alien hive.