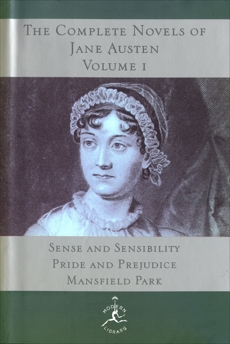 Synopsis: The first volume in the Complete Novels of Jane Austen, this volume contains the classics Sense and Sensibility, Pride and Prejudice, and Mansfield Park.

Sense and Sensibility was the first of Jane Austen's novels to be published, coming out in 1811. It had a long gestation, beginning as Elinor and Marianne, an epistolary novel that Austen wrote in the 1790s. The novel centers on the sisters Elinor and Marianne Dashwood, who are forced to leave their home with their mother and younger sister, Margaret, and move in reduced circumstances to the West of England. Elinor, the sensible sister, and Marianne, the overimaginative romantic, must rely on a good marriage as a means of support. As their excellent schemes are intruded upon, Austen subtly explores the marriage game of her times, as both sense and sensibility affect the sisters' chances of happiness and comfort.

“It is a truth universally acknowledged, that a single man in possession of a good fortune must be in want of a wife.” So begins Pride and Prejudice, Jane Austen’s witty comedy of manners—one of the most popular novels of all time—that features splendidly civilized sparring between the proud Mr. Darcy and the prejudiced Elizabeth Bennet as they play out their spirited courtship in a series of eighteenth-century drawing-room intrigues. Renowned literary critic and historian George Saintsbury in 1894 declared it the “most perfect, the most characteristic, the most eminently quintessential of its author’s works,” and Eudora Welty in the twentieth century described it as “irresistible and as nearly flawless as any fiction could be.”

Mansfield Park shows Austen as a mature novelist with an almost unparalleled ability to render character and an acute awareness of her world and how it was changing. Through the stories of Fanny Price, the Bertrams, and the Crawfords, she tackles the themes of faith and constancy and the threat that metropolitan manners could pose to a rural way of life. Mansfield Park is as amusing as any of Austen's novels, but, according to the critic Tony Tanner, it is also arguable that it is “her most profound novel (indeed . . . it is one of the most profound novels of the nineteenth century).”