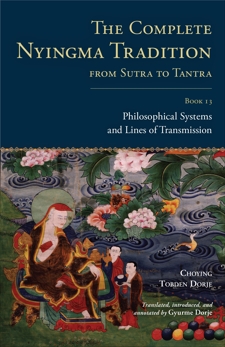 The Complete Nyingma Tradition from Sutra to Tantra, Book 13: Philosophical Systems and Lines of Transmission

Synopsis: Chöying Tobden Dorje's magnum opus presented in English for the first time, in an authoritative translation prepared under the auspices of well-known and highly respected Tibetan teachers and translators.


In 1838, Choying Tobden Dorje, a yogin and scholar of northeastern Tibet, completed a multivolume masterwork that traces the entire path of the Nyingma tradition of Tibetan Buddhism from beginning to end. Written by a mantra practitioner for the benefit of mantra practitioners living among the lay community, it was intended to be informative, inspirational, and above all, practical. Its twenty-five books, or topical divisions, offer a comprehensive and detailed view of the Buddhist path according to the early translation school of Tibetan Buddhism, spanning the vast range of Buddhist teachings from the initial steps to the highest esoteric teachings of great perfection. Choying Tobden Dorje’s magnum opus appears in English here for the first time.

Book 13 presents the philosophical systems of India and Tibet, according to the writings of Longchen Rabjam and the revelations of Orgyan Lingpa. First, it discusses the views attributed to classical Hinduism, Jainism, materialism, and nihilism. Second, it describes the standpoints of the Vaibhashika and Sautrantika exponents of the lesser vehicle, exemplified by pious attendants and hermit buddhas, and the Cittamatra (“mind only”) and Madhyamaka (“middle way”) commentators of the great vehicle, exemplified by great bodhisattva beings. Third, it analyzes the inner and outer vehicles of the Buddhist tantras, with an emphasis on the three classes of the great perfection. Fourth, it documents the lines of philosophical transmission within Tibet, including Bon, Nyingma, Kagyu, Sakya, Kadampa, and Geluk. It concludes with an extract from a well-known treatise of the Fifth Dalai Lama, applying the techniques of consequential reasoning to the first chapter of Vasubandhu’s Treasury of Phenomenology.