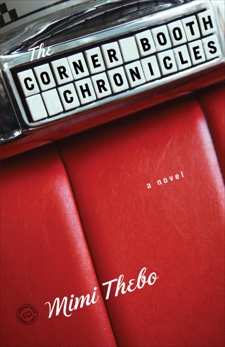 The Corner Booth Chronicles: A Novel

Synopsis: EUDORA IS A SMALL TOWN WHERE SECRETS SIMPLY DON’T EXIST, THANKS TO NOSY NEIGHBORS AND LIGHTNING-FAST GOSSIP.

As summer descends on Eudora, tempers rise with the scorching sun. The romance of Janey Lane and Mark Ramirez is a perfect example of how the town has resolved its racial tensions, but misunderstandings (compounded by a late-night discovery of beautiful Kylie Requena in Mark’s living room) lead Janey and Mark to call it off. And theirs is not the only split. Patti and Phil Walker, with three mischievous boys and another baby on the way, have not been seen together in weeks. Now Phil has moved in with Chuck from the Beer and Bowl, and the two seem to be plotting something with retiring wheat farmer Jim Evans. It’s suspected that Jim Flory (the town’s confirmed bachelor) might be in on it, but nobody’s sure what “it” might be.

The over-the-hedge talk ignites as Mark fumbles his attempt to re-woo Janey (honestly, a ring and a wedding date would have sealed the deal). Toss in mounting pressure on the farming community, political conflicts (local and beyond), some strange crops growing in a certain backyard, and even more babies–now that herbalist and part-time spell maker Lottie, who is conspiring to save Patti’s and Janey’s romances, is herself pregnant–and Eudora must take collective cover as sparks fly.

Happily, the town is quick to forgive its all-too-human citizenry, as profound questions of existence take comic and heartfelt turns in a place where nothing much ever happens–except life.