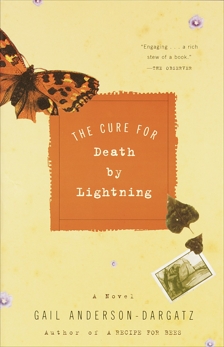 The Cure for Death by Lightning

Synopsis: When fifteen-year-old Beth Week’s family is attacked by a grizzly, her father becomes increasingly violent, making him a danger to his neighbors, his family, and especially Beth. Meanwhile, several young children from the nearby Indian reservation have gone missing, and Beth fears that something is pursuing her in the bush. But friendship with an Indian girl connects her to a mythology that enriches her landscape; and an unexpected protector shores up her world.
Set on an isolated Canadian farm in the midst of World War II, The Cure for Death by Lightning evokes a life at once harshly demanding and rich in sensory pleasures: the deafening chatter of starlings, the sight of thousands of painted turtles crossing a road, the smell of baking that fills the Weeks’s kitchen. The novel is sprinkled throughout with recipes and remedies from the scrapbook Beth’s mother keeps, a boon to Beth as she learns to face down her demons--and one of many elements that give The Cure for Death by Lightning its enchanting vitality.