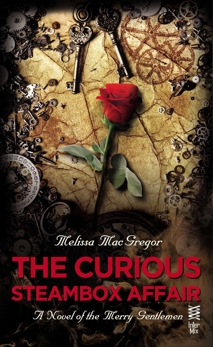 Synopsis: The captivating debut novel in a steampunk mystery series featuring a physician’s assistant who is particularly adept with cases of murder.

The year is 1827, and Alistair Purefoy, a young physician’s assistant, moves to Edinburgh to take a position with one Dr. Hyde. His colleagues call him a monster, while Hyde himself claims to have invented a Steambox that harnesses the human soul. Undaunted by these peculiarities, Alistair proves his mettle with the infamous Doctor, but he soon finds himself occupied outside the Operating Theatre as well…

When someone in his rooming house is murdered, Alistair is unnerved by the lack of interest from the police. He begins to investigate on his own, discovering a string of gruesome murders that appear to be connected, not only to each other, but also to him. Now Alistair can use all the help he can get, and with the aid of a secret society known as The Merry Gentlemen, he’s about to uncover a deadly experiment more monstrous than anything of Dr. Hyde’s imagining.