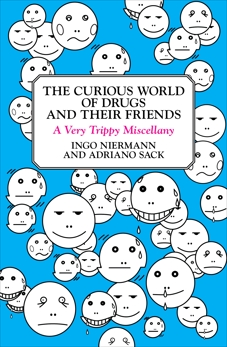 The Curious World of Drugs and Their Friends: A Very Trippy Miscellany

Synopsis: Wacky but well-researched, unbiased and shameless, this informational book about drugs dares to take readers on a long, strange trivia trip.

Following in the tradition of The Ultimate Book of Useless Information, The Curious World of Drugs and Their Friends is a wry potpourri of interesting information about every conceivable kind of drug. Readers can feed their heads with anecdotes, facts, lists, statistics, and illustrations, including:

• The test results of animals on LSD—cats lose their fear of dogs, and goats walk in geometric patterns
• Drugs found in nature, from magic mushrooms to St. John’s wort to beaver secretions
• Celebrities who overdosed at age 27—Jimi Hendrix, Janis Joplin, Jim Morrison, Kurt Cobain, Brian Jones, and Jean Michel-Basquiat
• Imaginary drugs in literature and film, from spice the mélange in Dune to Moloko plus in A Clockwork Orange
• Nicknames for a joint—from doobie to giggly stick to Mr. Boom Bizzle
• The global percentages of adults who have used cannabis—.004 percent in Singapore and 12.6 percent in the United States
• The uses of opium in ancient Rome—from treatments for insomnia and epilepsy to colic and deafness
• The most glamorous rehab clinics and their celebrity alumni
• Mini-biographies of the biggest drug kingpins around the world