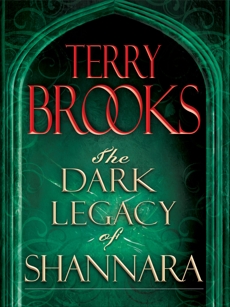 Synopsis: In the latest Shannara trilogy, New York Times bestselling author Terry Brooks revisits one of the most popular eras in the legendary epic fantasy series that has spellbound readers for more than three decades. A perfect jumping-off point for new readers that’s sure to delight dedicated fans, the entire Dark Legacy Shannara adventure is now available in one thrilling eBook bundle:

When the world was young, the power of magic ruled—and the Elfstones warded the race of Elves and their lands, keeping evil at bay. But when an Elven girl fell hopelessly in love with a Darkling boy of the Void, he carried away more than her heart.

Thousands of years later, tumultuous times are upon the world now known as the Four Lands. Users of magic are in conflict with proponents of science. Elves have distanced their society from the other races. The dwindling Druid order and its teachings are threatened with extinction. A sinister politician has used treachery and murder to rise as prime minister of the mighty Federation. Meanwhile, poring through a long-forgotten diary, the young Druid Aphenglow Elessedil has stumbled upon the secret account of an Elven girl’s heartbreak and the shocking truth about the vanished Elfstones. But never has a little knowledge been so very dangerous—as Aphenglow quickly learns when she’s set upon by assassins.

Yet there can be no turning back from the road to which fate has steered her. Whoever captures the Elfstones and their untold powers will surely hold the advantage in the devastating clash to come. But when the Druids mount an expedition to locate the missing stones, they quickly discover there may be even more at stake than they ever expected.

Praise for The Dark Legacy of Shannara

“Arguably [Terry Brooks’s] best work to date . . . Brooks is one of the best fantasy writers in the business. . . . He has a keen eye for great world-building as well as unforgettable characters.”—Associated Press

“Fans will not be disappointed. . . . [Wards of Faerie] doesn’t skimp on the action scenes.”—Kirkus Reviews

“From the first pages to the harrowing ending, Bloodfire Quest . . . is a thrill ride that will leave readers wanting more. . . . This volume, paired with the first, might be just the right place to introduce new readers to this fine writer.”—Booklist (starred review)

“The final chapter in Brooks’s latest trilogy set in his beloved world of Shannara peaks in a bittersweet conclusion that seems to set the stage for future books. A must for the numerous die-hard Shannara fans.”—Library Journal

“The Sword of Shannara is an unforgettable and wildly entertaining epic, animated by Terry Brooks’s cosmically generative imagination and storytelling joy.”—Karen Russell, author of Swamplandia!

“If Tolkien is the grandfather of modern fantasy, Terry Brooks is its favorite uncle.”—Peter V. Brett, author of The Desert Spear

“I can’t even begin to count how many of Terry Brooks’s books I’ve read (and reread) over the years. From Shannara to Landover, his work was a huge part of my childhood.”—Patrick Rothfuss, author of The Name of the Wind