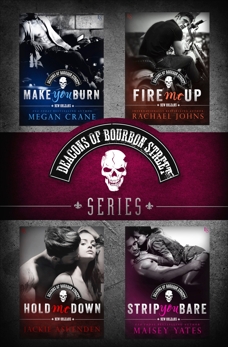 The Deacons of Bourbon Street Series 4-Book Bundle: Make You Burn, Fire Me Up, Hold Me Down, Strip You Bare

Synopsis: Four acclaimed authors team up for a seductive series featuring the hottest motorcycle club in New Orleans! Starring a quartet of bad-boy bikers who are hell on wheels—and heaven between the sheets—this addictive ebook bundle includes Make You Burn, Fire Me Up, Hold Me Down, and Strip You Bare.

MAKE YOU BURN by Megan Crane

Sean “Ajax” Harding’s oaths are inked into his skin, but only the death of his beloved mentor, Priest Lombard, could lure him back to New Orleans. Walking into the old hangout gives him a familiar thrill—especially when he gets an eyeful of the bar’s delectable new owner. Then he realizes that she’s Priest’s daughter. Sophie Lombard loved her father, not his lifestyle. She’s done with bikers . . . until Ajax roars into town—arrogant, tough, and sexy as ever. Every touch from Ajax is steamier than the Louisiana bayou—and heat like this may just be worth getting burned.

FIRE ME UP by Rachael Johns

With Priest gone, Travis “Cash” Sinclair inherits the Deacons’ clubhouse—and its unexpected tenant. All incense and art, with a sharp tongue that promises trouble, she’s definitely not his type. So why does Cash want to push aside those flowing skirts and lose himself between her legs? Billie Taylor fled a bad marriage to start a new life in the French Quarter. She refuses to let another man distract her, especially an outlaw biker with nothing to offer except hot sex and an eviction notice. Billie won’t fall under his spell—or into his bed—without a fight.

HOLD ME DOWN by Jackie Ashenden

Leonidas “Blue” Delacroix is the prodigal son of New Orleans aristocrats, but the Deacons are his real family. With their patriarch murdered, Blue’s ready to unleash hell—even if it means taking up arms against the girl who used to be his best friend. For Alice Day, loyalty is everything. She never forgot the scent of leather on Blue’s skin—just as she never forgave the sting of his betrayal when he skipped town. Seeing him again reawakens old feelings . . . and fiery fantasies. As their liaisons hit the boiling point, Alice trusts her heart with the deadliest choice of her life.

STRIP YOU BARE by Maisey Yates

Micah “Prince” Carpenter hates New Orleans. But when the brotherhood calls, he answers. Joining the hunt for their mentor’s killer, Micah crosses paths with a Southern belle who exudes class—and who could use a taste of the wrong side of the tracks. The daughter of a prominent family rocked by scandal, Sarah Delacroix is desperate to restore their good name. Micah’s exactly the kind of man she should be avoiding. Behind his sleek and sophisticated exterior beats the heart of a predator. But, like the tattoos beneath his tailored suit, his rough edges are irresistible.

Praise for the Deacons of Bourbon Street series

“Launching a biker-themed contemporary series, [Megan] Crane piles on the passion and danger. . . . This tough and dirty world is fascinating and satisfying in its own way.”—Publishers Weekly, on Make You Burn

“As far as biker series goes, this one has certainly been a heck of a lot of fun! Sexy, smooth and sweet, Rachael Johns’s installment of the Deacons of Bourbon Street is not to be missed.”—A Tasty Read, on Fire Me Up

“I can truly say that I am sad to see this series end. . . . If you enjoy an exciting MC book with a touch of mystery then this series is exactly what you are looking for.”—Harlequin Junkie, on Strip You Bare