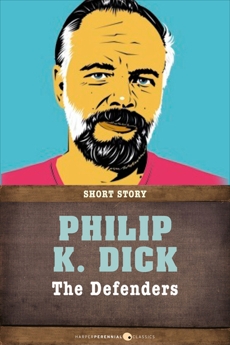 After a devastating war between the United States and the Soviet Union mankind has taken refuge beneath Earth’s surface. But the war continues above ground, with robots called “leadys” fighting on our behalf—or so the humans think. “The Defenders” was later expanded into a full-length novel entitled The Penultimate Truth, published in 1964.

Philip K. Dick was an American science-fiction novelist, short-story writer and essayist. His first short story, “Beyond Lies the Wub,” was published shortly after his high school graduation. Some of his most famous short stories were adapted for film, including “The Minority Report,” “Paycheck,” “Second Variety” (adapted into the film Screamers) and “We Can Remember It For You Wholesale” (adapted into the film Total Recall).