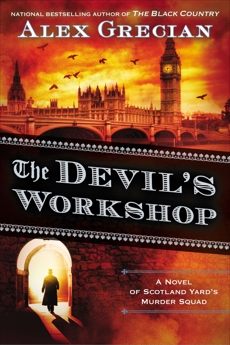 Synopsis: They thought he was gone, but they were wrong. Jack the Ripper is loose in London once more.

Scotland Yard’s Murder Squad faces the most shocking case of its existence, in the extraordinary new historical thriller from the author of the acclaimed national bestsellers The Yard and The Black Country.

London, 1890. A small group of the city’s elite, fed up with the murder rate, have made it their business to capture violent criminals and mete out their own terrible brand of retribution. Now they are taking it a step further: They have arranged for four murderers to escape from prison, and into the group’s hands.

But the plan goes wrong. The killers elude them, and now it is up to Walter Day, Nevil Hammersmith, and the rest of Scotland Yard’s Murder Squad to hunt the convicts down before they can resume their bloody spree. But the Murder Squad may already be too late. The killers have retribution in mind, and one of them is heading straight toward a member of the Murder Squad, and his family.

And that isn’t even the worst of it. During the escape, one of the killers has stumbled upon the location of another notorious murderer, one thought gone for good, but who is now prepared to join forces with them.

And Saucy Jack has learned some new tricks while he’s been away.