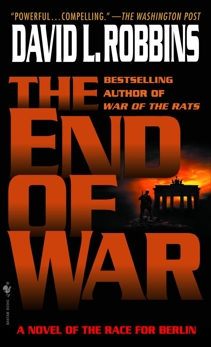 The End of War: A Novel of the Race for Berlin

Synopsis: Berlin, January  1945
The war draws to a close, but the fight for a vanquished city--and for history--is just beginning.

On the heels of the critically  acclaimed War of the Rats , the new master of historical suspense, David L. Robbins, turns his compelling vision on the waning months of World War II, when world leaders  engage in a dicey  game of cat  and mouse  to ultimately determine the fate of the second half of the twentieth century.

The End of War
In the final months of the war in Europe, the last act of a five-year conflagration is  about to be played out.  Allied generals  move their war-hardened  armies  around the mortally wounded Nazi military machine.  But strategies  are being  formed on a greater scale  than even generals  can  imagine. While Churchill  fumes helplessly, Roosevelt  makes  crucial decisions  that will cede  Berlin to Stalin and the Russians.

The stakes are no less critical for ordinary men and women, fighting to live another  day. On the ground  are young  Russian soldiers driven by vengeance  into the teeth of the still-deadly Nazi army;  American  forces push forward under  the  political  motives of a canny commander- in- chief; and the British, aloof, at odds with their Yankee  counterparts, see in these last fateful moves  a devastating  betrayal by Washington and Moscow.

The End of War vividly animates the giants who shaped history and breathes life into the heartbreaking struggles of those who merely lived it. From the chaos of the trenches  on the eastern front, to the desperation   of a single  Jewish man  hidden in a Berlin basement by a terrified mother and daughter,  to the burning  ambition of an American photojournalist  determined  to  capture  on film the defining moment  of the war, Robbins ushers us into the sweep of history  and  the  drama  of the  human  face of war.

An epic  novel exploding  with the urgency  of battle  and  history in the  making,  here  is The End of War.