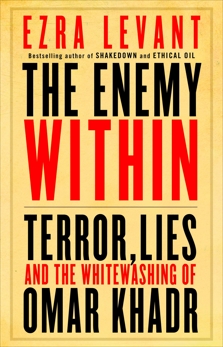 The Enemy Within: Terror, Lies, and the Whitewashing of Omar Khadr

Synopsis: A controversial look at the headline-making story of the last Western prisoner at Guantanamo Bay and the larger implications to national security, justice, and international relations.

Omar Khadr is the last Western prisoner at the Guantanamo Bay detention centre. He has been held at the American naval base since October 2002, accused of killing a U.S. sergeant in Afghanistan. Khadr was fifteen at the time. His defence team argued that their client was a child soldier and should be treated as a victim. After several years of procedural wrangling, Khadr went before a U.S. military court. In October, he pled guilty, in an agreement that allows him to be transferred to Canada after one year.

This controversial new book will be published to coincide with Omar Khadr's return to Canada in late 2011. It will include shocking information about the Khadr family, Khadr's psychological assessment, and his trial that has often been ignored in the mainstream media. Challenging the conventional wisdom about the Khadr case, The Enemy Within is a provocative look at the definition of "child soldier," life at Guantanamo Bay, the media coverage of the case, a tainted plea bargain, and the Canadian government's plan for Omar Khadr's rehabilitation upon his return to Canada.

In this hard-hitting book, Ezra Levant also uses Khadr's story to address larger questions about how Canadians view immigration, terrorism, law and justice, and Canada's relationship with the United States.