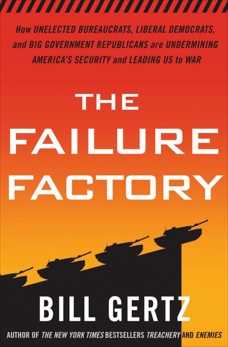 The Failure Factory: How Unelected Bureaucrats, Liberal Democrats, and Big Government Republicans Are Undermining America's Security and Leading Us to War

Synopsis: The U.S. government is in crisis.

With America’s attention fixated on who will step into the Oval Office in 2009, no one has noticed where the real power has shifted—to a vast network of unelected officials whose authority has grown wildly out of control. In his latest blockbuster book, acclaimed defense and national security reporter Bill Gertz exposes these astonishingly powerful leaders and their enablers in the political class—and their devastating impact on America's national security.

Gertz shows how entrenched liberal activists have become dominant even under an ostensibly conservative administration. And he names names of those who actively subvert official U.S. policy—including not only liberal Democrats but also a number of so-called Republicans who have joined this insidious “Blame America First” crowd.

• The shocking, previously untold story of the partisan bureaucrats who completely undercut the U.S. position on Iran’s radical Islamist regime
• Barack Obama’s disastrous national security policies—and his stable of advisers who have already put America at risk
• The recent showdown in the Pentagon that laid bare the U.S. government’s ongoing failures to tackle the threat of Islamist extremism
• Flagrant cases of sabotage by top State Department officials that have emboldened dangerous states like Iran, North Korea, Russia, and Communist China
• Stunning new intelligence failures—including one that may have allowed a terrorist group to penetrate the FBI and CIA
• How even the Bush White House was overrun with Democrats and liberal Republicans
• The legions of “Clinton generals”—top military brass whose careers blossomed during the Clinton administration—who make the United States more vulnerable
• How Democrats are exploiting the antiwar movement for political gain, with little regard for the potentially devastating consequences
• How the defense secretary’s public defiance of official U.S. policy could have gotten him fired—but instead went unchallenged

Based on scores of exclusive interviews and displaying the groundbreaking reporting that has made Bill Gertz’s previous books smash bestsellers, The Failure Factory offers a chilling look at the threats to our national security that exist within our own government.