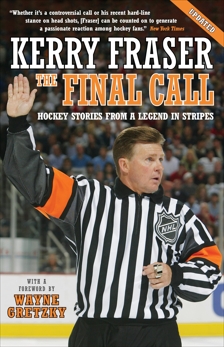 The Final Call: Hockey Stories from a Legend in Stripes

Synopsis: After almost two thousand games and thirty years of wearing the Stripes, legendary NHL official Fraser dropped his final puck at the end of the 2009/2010 season and relives his colourful career officiating hockey in his candid book.

After thirty years in the NHL, legendary referee Kerry Fraser has decided to hang up his skates and enjoy the game from the other side of the boards. Never shy about offering his opinion, nor afraid to step in and separate an on-ice fight, the diminutive Fraser is without question one of the most respected officials in today's NHL. Fraser entered officiating after recognizing that his size would limit his chances as a player. Over the course of the almost two thousand NHL contests, he has shown himself to be an exemplary referee. In The Final Call, Fraser uses the seventy two games he is officiating in his farewell season as the centre piece of his story. He relives candid memories from each city he visits, such as the night he was pulled from the ice by the Boston police after a threat was made that if he skated out for the second period he would be shot. Fraser offers a colourful, behind-the-scenes portrait of our national game, recounting stories of pulling apart enraged 250-lb men in on-ice battles and divulging the politics behind which games are assigned to which refs. Although a referee's job and story may not appear as glamorous as that of a superstar player, it is every bit as entertaining!