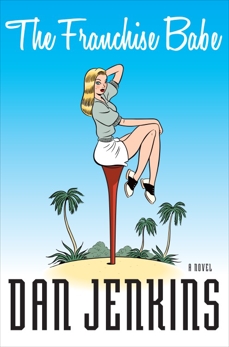 The Franchise Babe: A Novel

Synopsis: Jack Brannon, a golf writer in his forties who has been bunkered more than once in the marriage game, covers the sport for a big-time magazine. Bored with the PGA, he decides to check out “the Lolitas,” on the LPGA Tour. Jack chooses as a magazine subject Ginger Clayton, a fiery eighteen-year old whose killer looks and killer game make her the kind of star who can take the LPGA to the next level. She is, indeed, The Franchise Babe, and everyone wants a part of her, but someone, it seems, is trying to knock Ginger out of the competition-permanently. Filled with dead-on take downs of sports moms, adventurous promoters, suck-up corporate sponsors, double-dealing sports agents, and just enough menace to make golf dangerous, Dan Jenkins latest tale of hijinks on the links is not to be missed.