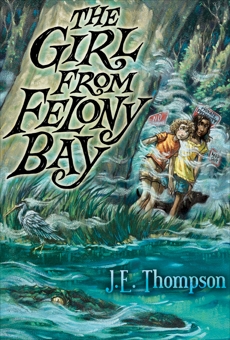 The Girl from Felony Bay

The last year has been rougher than sandpaper for Abbey Force and her dad. He’s in a coma after his accident a year back, wherein he was framed for a terrible crime he didn’t commit. And their home, Reward Plantation, an idyllic spot on the eastern coast of South Carolina, had to be sold to pay off his debt to society. Abbey is stuck living with her uncle Charlie, who, even in the few hours a day when he’s sober, ain’t exactly your ideal parental role model.

But it turns out the new family that moved into Abbey’s old house has a daughter named Bee. And she’s just as curious about all the No Trespassing signs and holes being dug out by Felony Bay, in the corner of what used to be Abbey’s home. It appears someone’s been poking around a mystery that dates all the way back to the Civil War—and it just might be the same someone who framed Abbey’s dad.