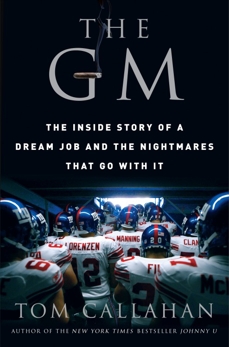 The GM: The Inside Story of a Dream Job and the Nightmares that Go with It

Synopsis: In the summer of 2006, the NFL’s most senior general manager, Ernie Accorsi, invited Tom Callahan “inside” the Giants organization to experience a season—Accorsi’s last—from the front office, the locker room, the sidelines, and the tunnel. Tom made no promises, except that he’d bring to the project the same fairness and thoroughness that characterized his acclaimed Unitas biography, Johnny U. The result is a remarkable book that is at once a chronicle of a tumultuous season and the story of the NFL over the last three and a half decades, told through the eyes of a man who has dedicated his life to football.

The Giants started the season with high expectations, hoping to ride the talent of players like Eli Manning, Jeremy Shockey, and Tiki Barber to the Super Bowl, but the team quickly fell apart due to injuries.

The GM goes far beyond the specifics of a single season, though. In a marriage of two great raconteurs, one lobbing stories and the other neatly catching them, Callahan and Accorsi—writer and subject—show how the pro game (and the league that showcases it) really works, and the peculiar role of today’s general manager, who must be part seer, part accountant, balancing psyches and salary caps.

At its essence, The GM is the story of the job—of what it means to be the guy who makes the decisions . . . who’s second-guessed by fans and the media . . . who must deal with endless—and sometimes impossible—expectations.

Filled with the vivid anecdotes and storytelling that made Johnny U a surprise bestseller, The GM doesn’t just illuminate. It inspires with its portrait of a consummate football-personnel strategist who, over the course of decades, gave everything to the game he loved.