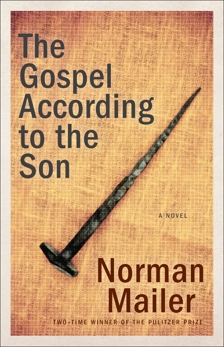 The Gospel According to the Son: A Novel

Synopsis: Norman Mailer fused fact and fiction to create indelible portraits of such figures as Marilyn Monroe, Gary Gilmore, and Lee Harvey Oswald. In The Gospel According to the Son, Mailer reimagines, as no other modern author has, the key character of Western history. Here is Jesus Christ’s story in his own words: the discovery of his divinity and the painful, powerful journey to accepting and expressing it, “as if I were a man enclosing another man within.” In its brevity and piercing simplicity, it may be Mailer’s most accessible, direct, and heartfelt work.

Praise for The Gospel According to the Son

“Quietly penetrating . . . [Norman Mailer’s] gospel is written in a direct, rather relaxed English that yet has an eerie, neo-Biblical dignity.”—John Updike, The New Yorker

“A book of considerable intellectual force . . . The writer’s powerful mind works in a specialized way, not by theological argumentation but by telling or retelling a story.”—The New York Review of Books

“An informed and believable work of fiction . . . of what may have been going through the mind of Jesus during his epic ministry.”—San Francisco Chronicle

“[Norman Mailer] loomed over American letters longer and larger than any other writer of his generation.”—The New York Times

“A writer of the greatest and most reckless talent.”—The New Yorker

“Mailer is fierce, courageous, and reckless and nearly everything he writes has sections of headlong brilliance.”—The New York Review of Books

“The largest mind and imagination [in modern] American literature . . . Unlike just about every American writer since Henry James, Mailer has managed to grow and become richer in wisdom with each new book.”—Chicago Tribune

“Mailer is a master of his craft. His language carries you through the story like a leaf on a stream.”—The Cincinnati Post