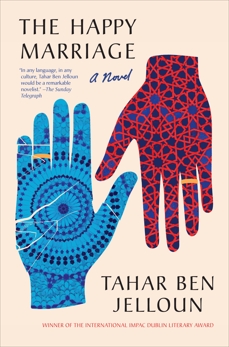 In The Happy Marriage, the internationally acclaimed Moroccan author Tahar Ben Jelloun tells the story of one couple—first from the husband’s point of view, then from the wife’s—just as legal reforms are about to change women’s rights forever.

The husband, a painter in Casablanca, has been paralyzed by a stroke at the very height of his career and becomes convinced that his marriage is the sole reason for his decline.

Walled up within his illness and desperate to break free of a deeply destructive relationship, he finds escape in writing a secret book about his hellish marriage. When his wife finds it, she responds point by point with her own version of the facts, offering her own striking and incisive reinterpretation of their story.

Who is right and who is wrong? A thorny issue in a society where marriage remains a sacrosanct institution, but where there’s also a growing awareness of women’s rights. And in their absorbing struggle, both sides of this modern marriage find out they may not be so enlightened after all.