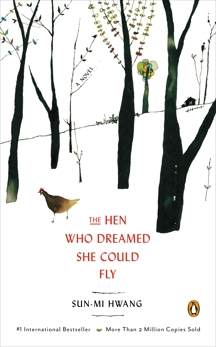 The Hen Who Dreamed She Could Fly: A Novel

This is the story of a hen named Sprout. No longer content to lay eggs on command, only to have them carted off to the market, she glimpses her future every morning through the barn doors, where the other animals roam free, and comes up with a plan to escape into the wild—and to hatch an egg of her own.

An anthem for freedom, individuality and motherhood featuring a plucky, spirited heroine who rebels against the tradition-bound world of the barnyard, The Hen Who Dreamed She Could Fly is a novel of universal resonance that also opens a window on Korea, where it has captivated millions of readers. And with its array of animal characters—the hen, the duck, the rooster, the dog, the weasel—it calls to mind such classics in English as Animal Farm and Charlotte’s Web.

Featuring specially-commissioned illustrations, this first English-language edition of Sun-mi Hwang’s fable for our times beautifully captures the journey of an unforgettable character in world literature.