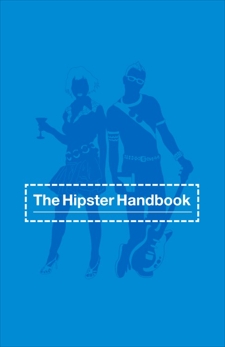 Synopsis: hip•ster - \hip-stur (s)\ n. One who possesses tastes, social attitudes, and opinions deemed cool by the cool. (Note: it is no longer recommended that one use the term "cool"; a Hipster would instead say "deck.") The Hipster walks among the masses in daily life but is not a part of them and shuns or reduces to kitsch anything held dear by the mainstream. A Hipster ideally possesses no more than 2% body fat.

Clues You Are a Hipster

1. You graduated from a liberal arts school whose football team hasn't won a game since the Reagan administration.

2. You frequently use the term "postmodern" (or its commonly used variation"PoMo") as an adjective, noun, and verb.

3. You carry a shoulder-strap messenger bag and have at one time or another worn a pair of horn-rimmed or Elvis Costello-style glasses.

4. You have refined taste and consider yourself exceptionally cultured, but have one pop vice (ElimiDATE, Quiet Riot, and Entertainment Weekly are popular ones) that helps to define you as well-rounded.

5. You have kissed someone of the same gender and often bring this up in casual conversation.

6. You spend much of your leisure time in bars and restaurants with monosyllabic names like Plant, Bound, and Shine.

7. You bought your dishes and a checkered tablecloth at a thrift shop to be kitschy, and often throw vegetarian dinner parties.

9. You enjoy complaining about gentrification even though you are responsible for it yourself.

10. Your hair looks best unwashed and you position your head on your pillow at night in a way that will really maximize your cowlicks.

11. You own records put out by Matador, DFA, Definitive Jux, Dischord, Warp, Thrill Jockey, Smells Like Records, and Drag City.