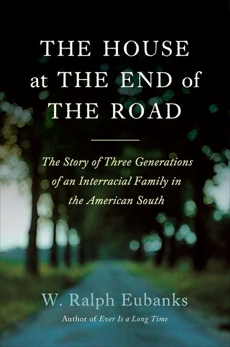 In 1914, in defiance of his middle-class landowning family, a young white man named James Morgan Richardson married a light-skinned black woman named Edna Howell. Over more than twenty years of marriage, they formed a strong family and built a house at the end of a winding sandy road in South Alabama, a place where their safety from the hostile world around them was assured, and where they developed a unique racial and cultural identity. Jim and Edna Richardson were Ralph Eubanks's grandparents.

Part personal journey, part cultural biography, The House at the End of the Road examines a little-known piece of this country's past: interracial families that survived and prevailed despite Jim Crow laws, including those prohibiting mixed-race marriage. As he did in his acclaimed 2003 memoir, Ever Is a Long Time, Eubanks uses interviews, oral history, and archival research to tell a story about race in American life that few readers have experienced. Using the Richardson family as a microcosm of American views on race and identity, The House at the End of the Road examines why ideas about racial identity rooted in the eighteenth century persist today. In lyrical, evocative prose, this extraordinary book pierces the heart of issues of race and racial identity, leaving us ultimately hopeful about the world as our children might see it.