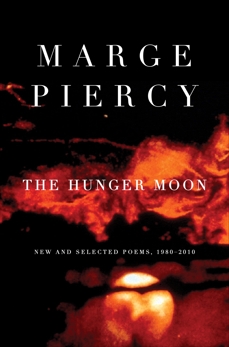 Synopsis: This new gathering of Marge Piercy’s poems—energetic, funny, political, full of vitality—brings us the heart of her mature work, the first selected since Circles on the Water in 1982.

Here are poems that chart the milestone events and fierce passions of her middle years: the death of her mother, whom we meet first as a young woman, “awkwardly lovely, her face / pure as a single trill perfectly / prolonged on a violin,” and again as an older woman musing on what the afterlife may hold for her. There is a new marriage which she celebrates not only for romantic beginnings but also for the more intimate details that emerge over time: “love cherishes too the backpockets, / the pencil ends of childhood fears.”

Some poems convey her long-held, never-wavering political convictions, which she declares in language unmistakably and colorfully her own, as when she encourages her feminist readers to go to the opera instead of the movies because at least there the heroine is real, “fifty and weighs as much as a ’65 Chevy with fins.”

Living out to sea on Cape Cod settles her into the rhythm of seasons and provides poems of planting and harvests, odes to tomatoes and roses, tributes to the power and freedom of whales. And in these years she rediscovers her Jewish heritage, celebrating holidays and making of them something new and original.

She begins to examine her own legacy:
I have worn the faces, the masks
of hieroglyphs, gods and demons,
bat faced ghosts, sibyls and thieves,
lover, loser, red rose and ragweed,
these are the tracks I have left
on the white crust of time.