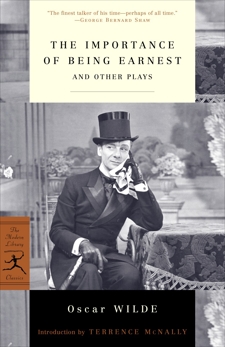 The Importance of Being Earnest: And Other Plays

Synopsis: Oscar Wilde created his final and most lasting play, comic masterpieces of all time, THE IMPORTANCE OF BEING EARNEST, in 1895. Considered one of the greatest THE IMPORTANCE OF BEING EARNEST is a farce, playing with love, religion, and truth as it tells the tale of two men. Jack Worthing and Algernon Moncrieff, who bend the truth in order to add excitement to their lives. Jack invents an imaginary brother, Ernest, whom he uses as an excuse to escape from his dull country home and gallavant in town. Meanwhile, Algernon follows Jack's scam, but his imaginary friend, Bumbury, provides a convenient method of adventuring in the country. However, their deceptions eventually cross paths, resulting in a series of crises that threaten to spoil their romantic pursuits. Hailed as the first modern comedy in England, THE IMPORTANCE OF BEING EARNEST is Wilde's most famous work. This collection also features two other plays that Wilde penned earlier in his career, LADY WINDERMERE'S FAN and AN IDEAL HUSBAND, that also display his ability to convey warmth and wit through his hilarious characters and their outlandish situations.