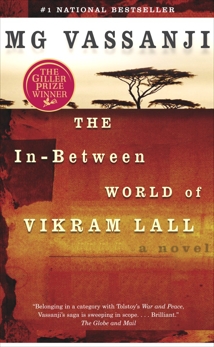 The In-Between World of Vikram Lall

Synopsis: Giller Prize-winner M.G. Vassanji’s The In-Between World of Vikram Lall is a haunting novel of corruption and regret that brings to life the complexity and turbulence of Kenyan society in the last five decades. Rich in sensuous detail and historical insight, this is a powerful story of passionate betrayals and political violence, racial tension and the strictures of tradition, told in elegant, assured prose.

The novel begins in 1953, with eight-year-old Vikram Lall a witness to the celebrations around the coronation of Queen Elizabeth II, just as the Mau Mau guerilla war for independence from Britain begins to gain strength. In a land torn apart by idealism, doubt, political upheaval and terrible acts of violence, Vic and his sister Deepa must find their place among a new generation. Neither colonists nor African, neither white nor black, the Indian brother and sister find themselves somewhere in between in their band of playmates: Bill and Annie, British children, and Njoroge, an African boy. These are the relationships that will shape the rest of their lives.

We follow Vikram through the changes in East African society, the immense promise of the fifties and sixties. But when that hope is betrayed by the corruption and violence of the following decades, Vic is drawn into the Kenyatta government’s orbit of graft and power-broking. Njoroge, his childhood friend, can abandon neither the idealism of his youth nor his love for Vic’s sister Deepa. But neither the idealism of the one nor the passive cynicism of the other can avert the tragedies that await them.

The In-Between World of Vikram Lall is a profound and careful examination of one man’s search for his place in the world, with themes that have run through Vassanji’s work: the nature of community in a volatile society, the relations between colony and colonizer, and the inescapable presence of the past. It is also, finally, a deeply personal book speaking to the people who are in the in-between.