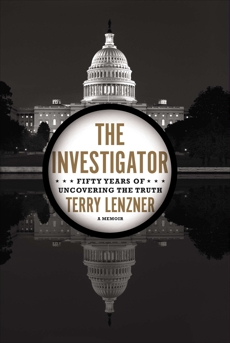 Synopsis: The Los Angeles Times once called investigative lawyer Terry Lenzner “one of the most powerful and dreaded private investigators in the world.” In his fifty-year career, Lenzner has worked with politicians, celebrities, governments, and corporations worldwide; with a steadfast commitment to the truth, he has uncovered facts that have shaped policy and influenced major legal battles.

In this captivating memoir, Lenzner speaks about his varied career and high-profile cases for the first time. At the Justice Department in 1964, he investigated the murder of three civil rights workers—an infamous event that inspired the film Mississippi Burning. He led the national Legal Services Program for the poor, prosecuted organized crime in New York, defended peace activist Philip Berrigan, and represented CIA operative Sid Gottlieb. As a counsel to the Senate Watergate Committee, Lenzner investigated Nixon’s dirty tricks and followed the money trail that led to the Watergate burglary and cover-up. He was the first person to deliver a congressional subpoena to a sitting U.S. president. He uncovered cost overruns of the Alaska oil pipeline, helped identify the Unabomber, investigated the circumstances of Princess Diana’s death, and cleared Hugo Chavez of false corruption charges. Lenzner also worked with President Clinton’s defense team during the impeachment hearings.

The Investigator is a riveting personal account: Lenzner astounds with anecdotes of scandal and intrigue, offers lessons in investigative methods, and provides an eye-opening look behind some of the most talked-about media stories and world events of our time.