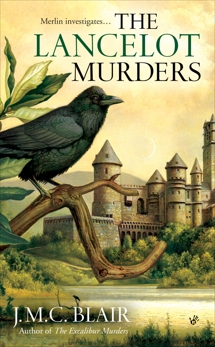 Synopsis: Throughout Camelot, he is whispered to be a magician, a sorcerer, a wizard. But Merlin is merely a scholar, a practitioner of medicine, and King Arthur’s trusted advisor. Though he possesses no otherworldly abilities, his keen intellect grants him certain powers of deduction.

Arthur, king of all the Britains, has not been fortunate in his marriage. His queen, Guenevere, has long kept her own court in the forbidding castle known as the Spider’s House, living there openly with the knight Lancelot. Still, even Merlin, who has little use for the pair, would never have predicted that they would plot to present themselves to the Byzantium Empire as the rightful rulers of England!

They plan to announce this at Guen’s birthday celebration, to which Arthur is invited. Forewarned, King and counselor make their own plans for thwarting the two. But as the guests gather, Guenevere’s father is found murdered—and Lancelot is the prime suspect. Merlin is inclined to leave the faithless knight to his fate—yet when his king bids him to, he risks his very life to find the truth.