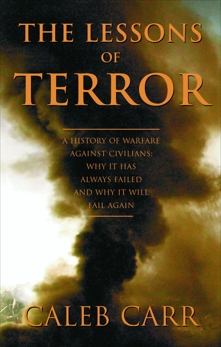 Synopsis: In The Lessons of Terror, novelist and military historian Caleb Carr examines terrorism throughout history and the roots of our present crisis and reaches a provocative set of conclusions: the practice of targeting enemy civilians is as old as warfare itself; it has always failed as a military and political tactic; and despite the dramatic increases in its scope and range of weapons, it will continue to fail in the future.

International terrorism—the victimization of unarmed civilians in an attempt to affect their support for the government that leads them—is a phrase with which Americans have become all too familiar recently. Yet while at first glance terrorism seems a relatively modern phenomenon, Carr illustrates that it has been a constant of military history. In ancient times, warring armies raped and slaughtered civilians and gratuitously destroyed property, homes, and cities; in the Middle Ages, evangelical Muslims and Christian crusaders spread their faiths by the sword; and in the early modern era, such celebrated kings as Louis XIV revealed a taste for victimizing noncombatants for political purposes.

It was during the Civil War that Americans themselves first engaged in “total war,” the most egregious of the many euphemisms for the tactics of terror. Under the leadership of such generals as Stonewall Jackson, the forces of the South tried to systematize this horrifying practice; but it fell to a Union general, William Tecumseh Sherman, to achieve that dubious goal. Carr recounts Sherman’s declaration of war on every man, woman, and child in the South—a policy that he himself knew was badly flawed, had nothing to do with his military successes (indeed, it hampered them), and brought long-term unrest to the American South by giving birth to the Ku Klux Klan.

Carr’s exploration of terror reveals its consistently self-defeating nature. Far from prompting submission, Carr argues, terrorism stiffens enemy resolve: for this reason above all, terrorism has never achieved—nor will it ever achieve—long-term success, however physically destructive and psychologically debilitating it may become. With commanding authority and the storyteller’s gift for which he is renowned, Caleb Carr provides a critical historical context for understanding terrorist acts today, arguing that terrorism will be eradicated only when it is perceived as a tactic that brings nothing save defeat to its agents.