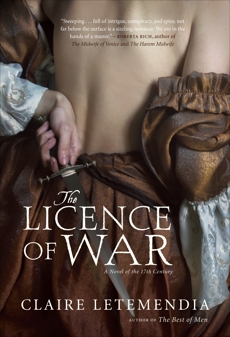 The Licence of War

Synopsis: This second thrilling novel featuring Laurence Beaumont, the seductive, sardonic protagonist introduced in The Best of Men, blends history and fiction in a seventeenth century alive with intrigue, passion, violence, and wit, from the embattled court of King Charles I at Oxford where poisonous rivalries fester, to stately country estates and the colourful underworld of thieves and whores.
1643: England is descending into a bloodier Civil War, and Beaumont, born a nobleman's heir but with a shadowy past as a mercenary turncoat and spy, has been hired against his will as agent to the King's new Secretary of State, the manipulative Lord Digby.
Still madly in love with the bewitching Isabella Savage, Beaumont is sent by Digby into enemy-held London to track down his counterpart, Parliament's twisted spymaster, who nourishes his own, very personal desire for revenge. Already Beaumont suspects he can trust no one, not even Isabella, who has deep ties to Digby. As power struggles seethe within the Royalist camp and Beaumont's tenuous faith in the King's cause is further eroded, he becomes haunted by nightmares portending two deaths: of the King, and of the Prince of Wales, for whom Beaumont cherishes a strong, protective bond.
At home, as his father's health weakens, Beaumont's duty is to choose a respectable wife and carry on the ancient line, though to give up Isabella will devastate him. Worse yet, a visitor from his mother's Spanish past appears with a long-buried secret that could ultimately destroy the Beaumont family.