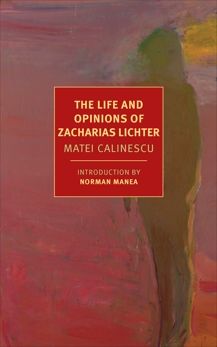 The Life and Opinions of Zacharias Lichter

Synopsis: A new translation of the only novel by lauded Romanian literary critic Matei Călinescu

Ugly, unkempt, a haunter of low dives who begs for a living and lives on the street, Zacharias Lichter exists for all that in a state of unlikely rapture. After being engulfed by a divine flame as a teenager, Zacharias has devoted his days to doing nothing at all—apart, that is, from composing the odd poem he immediately throws away and consorting with a handful of stray friends: Poldy, for example, the catatonic alcoholic whom Zacharias considers a brilliant philosopher, or another more vigorous barfly whose prolific output of pornographic verses has won him the nickname of the Poet. Zacharias is a kind of holy fool, but one whose foolery calls in question both social convention and conventional wisdom. He is as much skeptic as ecstatic, affirming above all the truth of perplexity. This of course is what makes him a permanent outrage to the powers that be, be they reactionary or revolutionary, and to all other self-appointed champions of morality who are blind to their own absurdity. The only thing that scares Zacharias is that all-purpose servant of conformity, the psychiatrist.

This Romanian classic, originally published under the brutally dictatorial Ceauşescu regime, whose censors initially let it pass because they couldn’t make head or tail of it, is as delicious and telling an assault on the modern world order as ever.