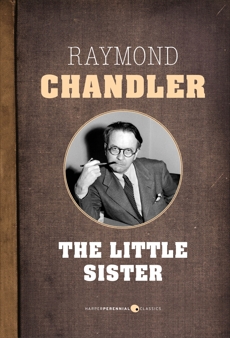 The Little Sister focuses on popular private eye Philip Marlowe. When hired for an easy job—to find a seemingly innocent girl's older brother—Marlowe doesn't expect to find a trail of dead bodies or gangsters in love with movie stars. As he begins to solve the riddles surrounding his investigation, Marlowe discovers that in Hollywood, people will do anything to keep a clean reputation.

From one of the original hardboiled detective writers, Raymond Chandler's Philip Marlowe is in a class of his own. Written after Raymond Chandler’s stint as a Hollywood screenwriter, The Little Sister reflects Chandler’s experience in the film industry, its corruption, and obsession with image. The Little Sister has been adapted for film and radio.