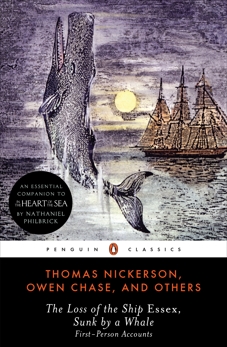 The Loss of the Ship Essex, Sunk by a Whale: First-Person Accounts

Synopsis: The gripping first-hand narrative of the whaling ship disaster that inspired Melville’s Moby-Dick and informed Nathaniel Philbrick’s monumental history, In the Heart of the Sea

In 1820, the Nantucket whaleship Essex was rammed by an angry sperm whale thousands of miles from home in the South Pacific. The Essex sank, leaving twenty crew members drifting in three small open boats for ninety days. Through drastic measures, eight men survived to reveal this astonishing tale. The Narrative of the Wreck of the Whaleship Essex, by Owen Chase, has long been the essential account of the Essex’s doomed voyage. But in 1980, a new account of the disaster was discovered, penned late in life by Thomas Nickerson, who had been the fifteen-year-old cabin boy of the ship. This discovery has vastly expanded and clarified the history of an event as grandiose in its time as the Titanic.

This edition presents Nickerson’s never-before-published chronicle alongside Chase’s version. Also included are the most important other contemporary accounts of the incident, Melville’s notes in his copy of the Chase narrative, and journal entries by Emerson and Thoreau.